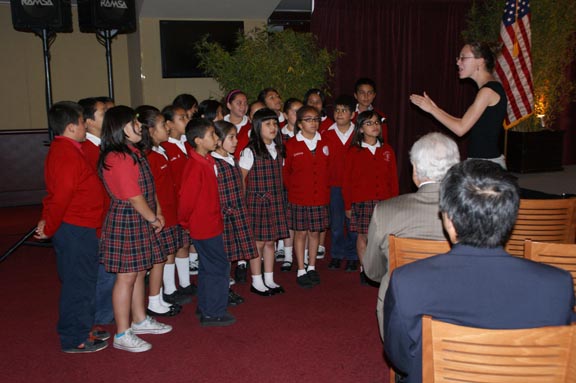 The St. Agnes Children Choir gave a special performance at a special event for USC President Sample on the occasion of his upcoming retirement. During his 19 years as president, Sample has made possible many community-outreach programs that provide students a wide range of activities - from after-school tutoring, sports programs, art and music programs, science
programs and more.

The choir performed two songs under the direction of… Continue 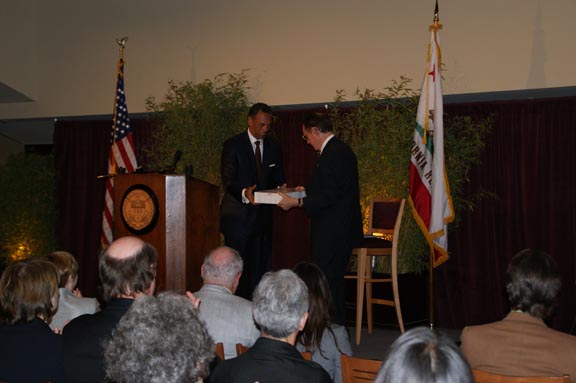 Students from the USC Family of Schools wrote letters of appreciation to USC President Sample on the occasion of his upcoming retirement. Letters thanked him for making possible the many community-outreach programs that provide students a wide range of activities - from after-school tutoring, sports programs, art and music programs, science programs and more.


A team of six people…

Once again, Dr. Mel Baron from the Health Sciences Campus and his team have developed a fun way to learn about a health issue in Oscar and The Giant. This time the topic of the story told in photographs is asthma, and it involves lucha libre wrestling. Lucha libre wrestling?! Yes, you just
might need super powers to take control of asthma, which is a disease of…

The U.S. Census counts every resident in the United States every 10 years—and the time is now. The 2010 Census will help communities receive more than $400 billion in federal funds each year for things like hospitals…

EXPO Center announces that it is time for Spring Sports 2010. Registration begins March 8 for middle school basketball, girl's volleyball, baseball and softball. Fees apply. Persons with disabilities are encouraged to participate. Reasonable accommodations will be made with prior arrangements.… Continue

Busy, Busy, Busy—Boy, has Kid Watch been busy this year! Brigette Kidd, program coordinator of the program, reports the many activities in which the program has been involved. Here’s a partial list of what and where Kid Watch has been active: October trainings, the Anti-graffiti Poster Contest, recess tables at Norwood, back-to-school nights at Weemes and Norwood, the Halloween carnival at Weemes, and recruitment…

More than 500 local students participated in the Educational Consortium of Central Los Angeles fall essay contest. Each submitted an essay on the theme “What I Want that Money Can’t Buy.” Judges, who read the essays, were moved by the touching and very personal stories that were submitted by students.

Several essays penned by students from the USC Family of Schools were selected as top essays.

If you are or know young adults between the ages of 18-31 with a high school diploma, the Federal Aviation Association is taking applications for air traffic controller school. With some effort air traffic controllers can reach a salary of over $100,000 with benefits in about 3 years! You need only a high school diploma to apply and credit is given for college on the exam.

Exposition Park/Vermont Senior Housing is now accepting applications to its senior apartment complex. This is a new, 138-apartment facility for income-qualifying seniors who are 62 years of age and older. Lots of bells and whistles. For more information, call: 323-334-3901 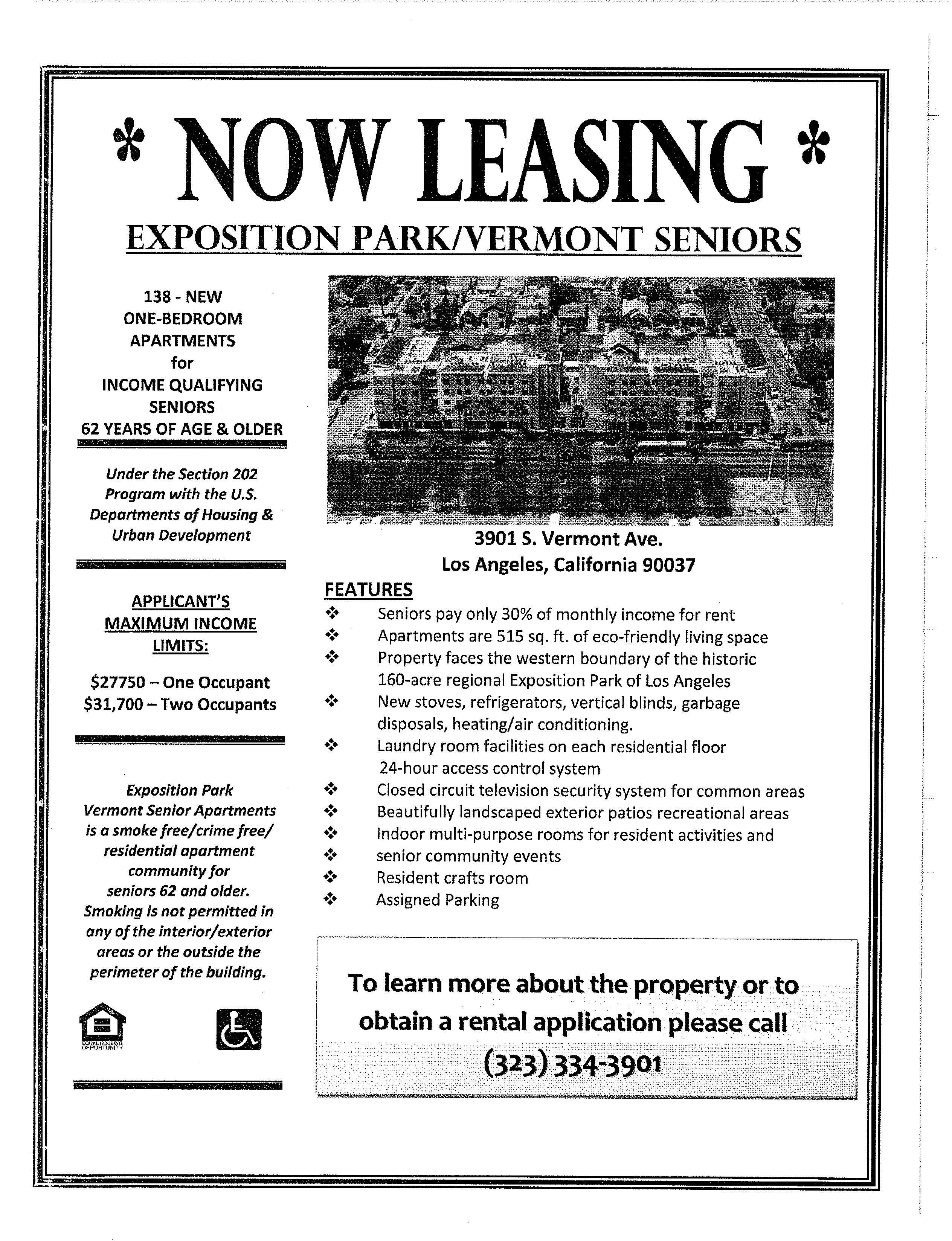 New beginnings—When Kid Watch kicked off this year with a Safety Task Force meeting, the fall trainings and school safety assemblies (with Jim Starr “the Singing Cop”), it also began with a new leader. Brigette Kidd (in grey jacket) has joined Kid Watch as the new program coordinator. As you can guess, she had her hands full right from the get go. But she has a good handle on things, and we know the program is in good hands. Another new face is… Continue 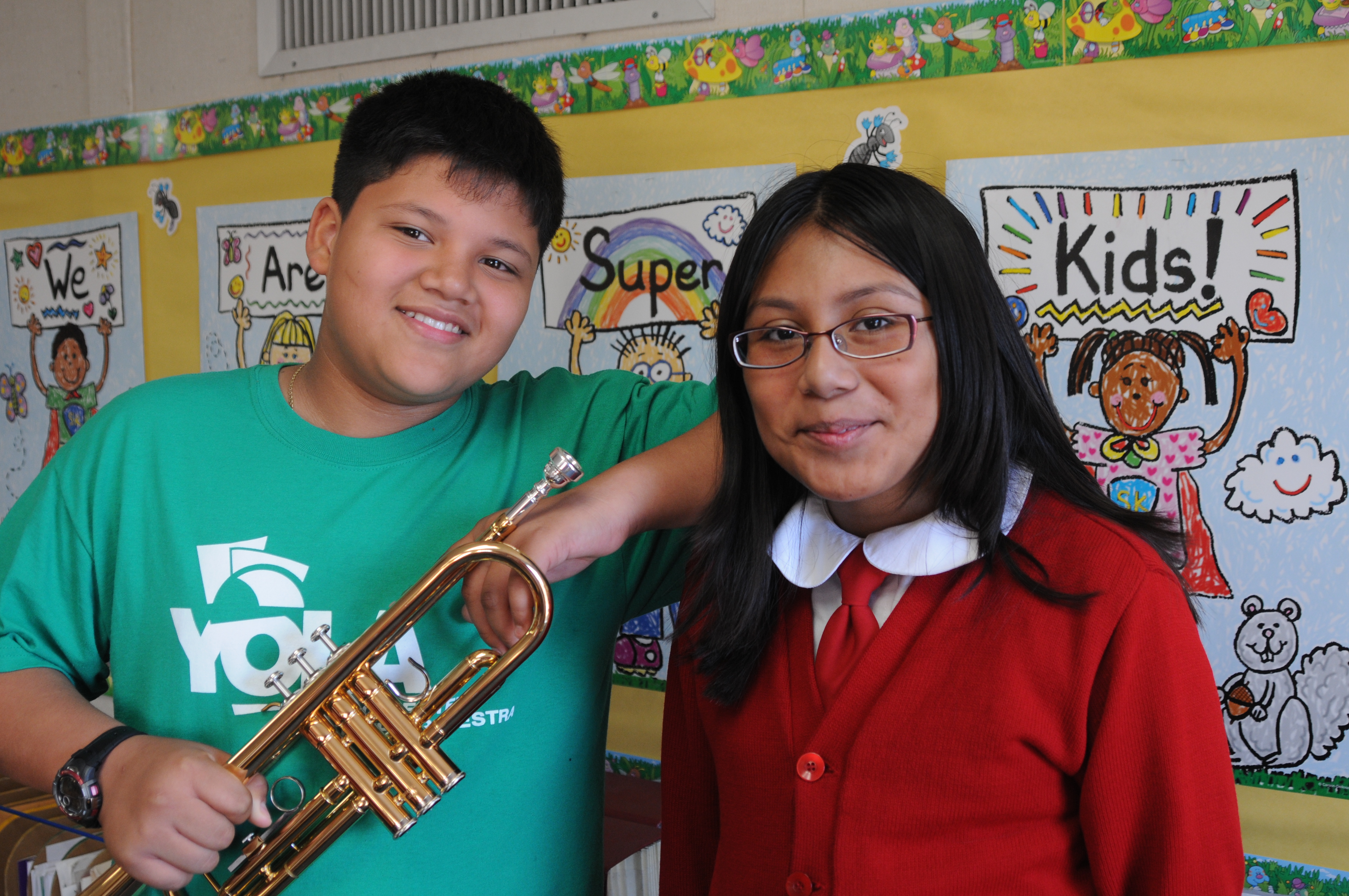 Dudamel fever spreads to EXPO Center
When Gustavo Dudamel, the new music director of the Los Angeles Philharmonic, made his “welcoming” appearance at the Hollywood Bowl on October 3, on hand were some lucky young musicians.

Every summer, the Congressional Hispanic Caucus Institute (CHCI) offers its Congressional Internship Program. In early June-early August, a cadre of promising Latino undergraduates from across the country are selected for an eight-week leadership training program in the nation's capital.

While in D.C., students complete internships on Capitol Hill, participate in a CHCI curriculum that focuses on their professional development, and learn about the importance of civic engagement. This… Continue Trojan football coach reaches out to kids | El entrenador de fútbol troyano se acerca a los niños
Legendary USC football coach, Pete Carroll, has created a Web site for kids of all ages —www.CampPete.com—so that he can interact one-on-one with kids across the country. It’s changing the way kids play and learn on-line. He’s emphasizing health, leadership and teamwork, even reading, and making it fun.
Inside this on-line world, kids can… Continue

USC Civic and Community Relations and USC ReadersPlus sponsored their annual writing contest in February. A new theme was introduced in celebration of Presidents’ Day and the inauguration of President Barack Obama. What advice do our students have for the new president? (Letters have been excerpted.) | La oficina de Relaciones Cívicas y Comunitarias de la USC y el programa USC ReadersPlus… Continue 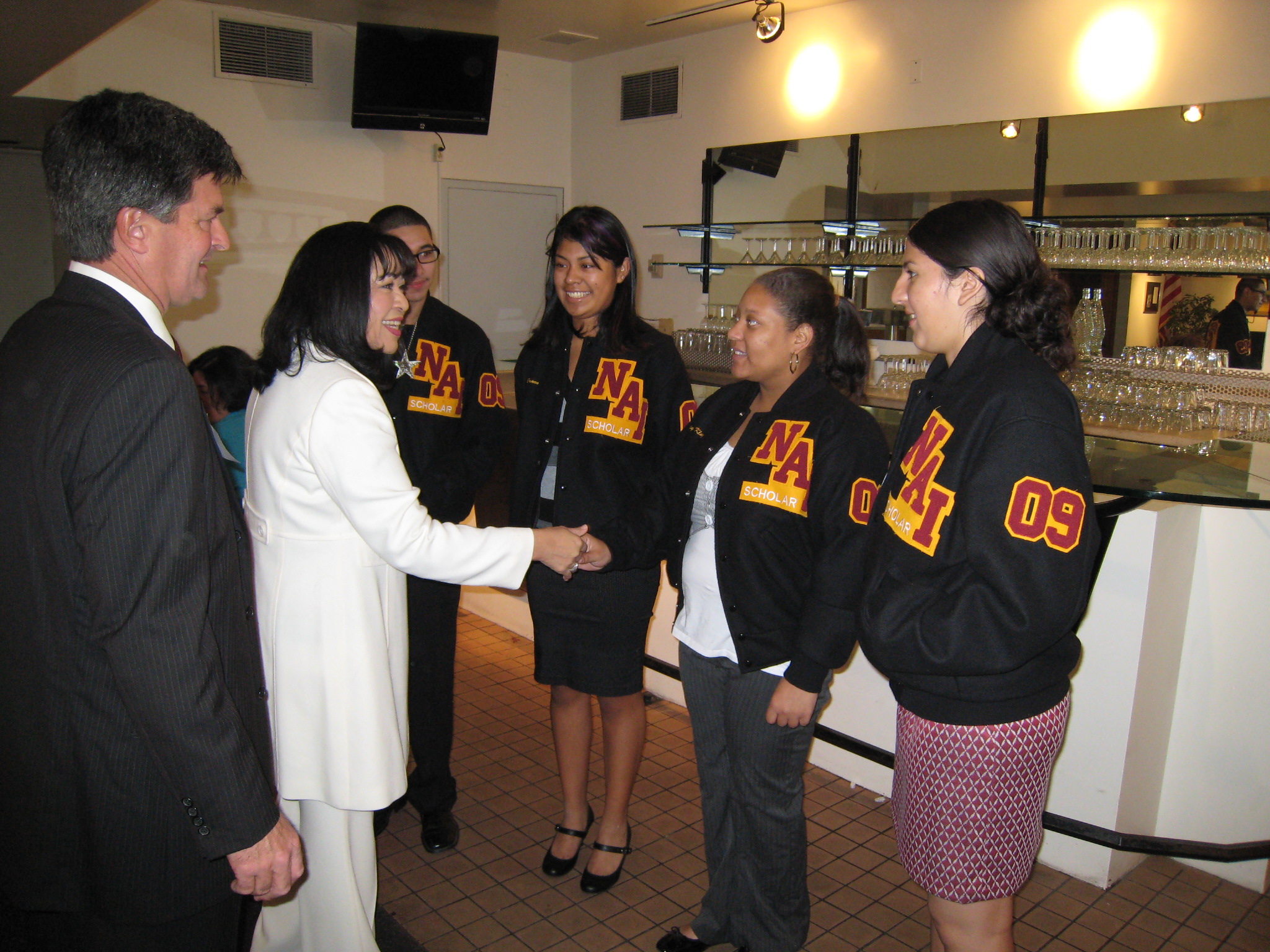 NAI guides local students into top colleges | El programa USC NAI conduce a estudiantes locales hacia las mejores universidades
Every 26 seconds another high school student drops out—1.2 million in all each year. That’s about a third of all students and half of all African American, Hispanic and Native American.
But something else is going on at the USC Neighborhood Academic Initiative. Begun in 1991, the initiative has a 100 percent… Continue 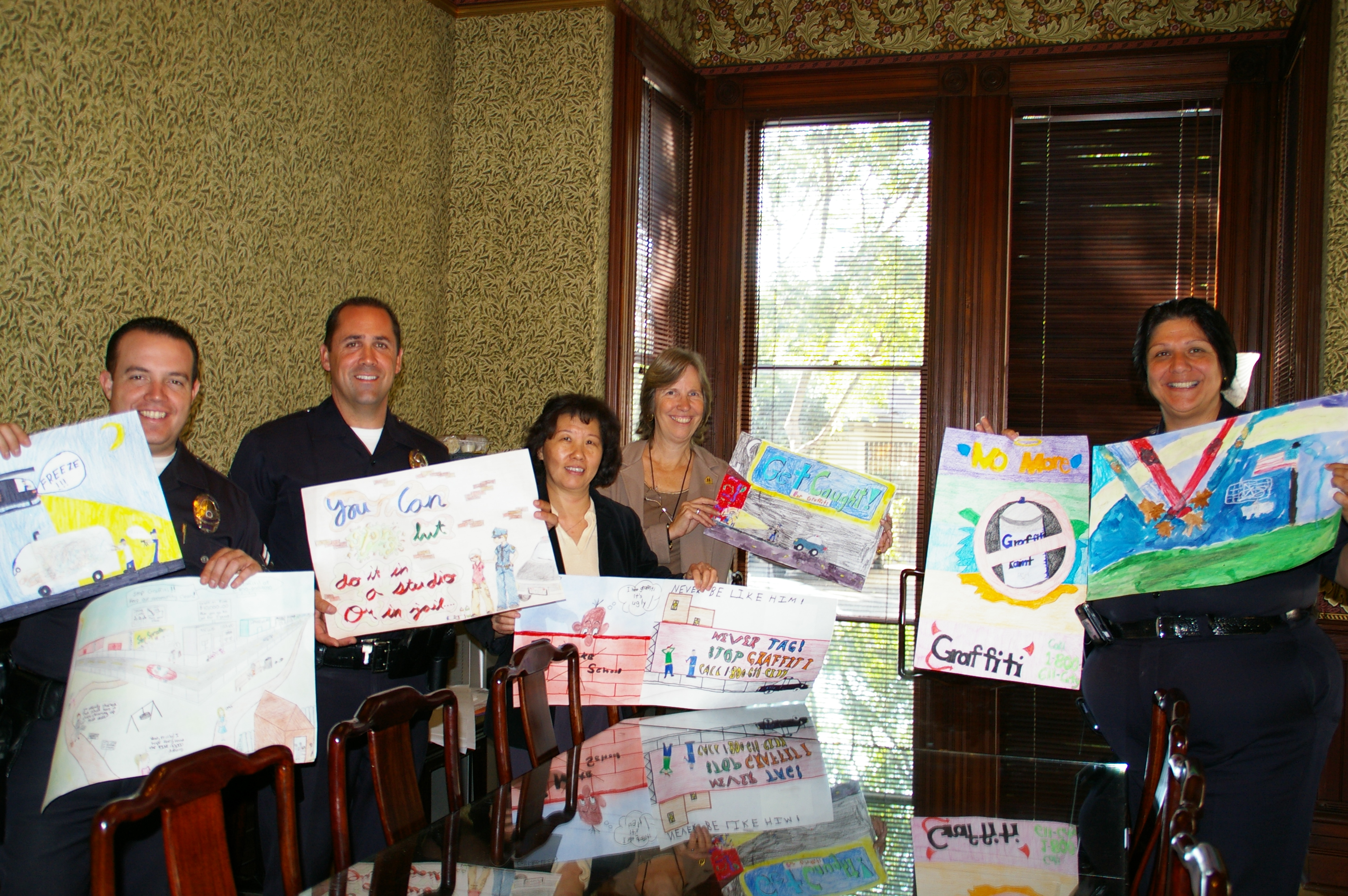 
Caught in the glare of a police helicopter spotlight, a group of young people is halted in the act of tagging a van with graffiti. This is just one of the dramatic images from the posters submitted by students from the USC Family of Schools to the annual, anti-graffiti, poster contest sponsored by… Continue

2009 USC Family of Schools Teacher of the Year Awards

In May 2009, the Bogart/USC Family of Schools awards honored educators who go above and beyond the call of duty at our local schools. Peer nominations are excerpted here. These are done in conjunction with the Education Consortium of Central Los Angeles (ECCLA). | En mayo de 2009, los premios… Continue

RISE on KPFK "a weekly creative (J)azz celebration of African roots, social consciousness & spiritual transcendence". Stylistically it generally revolves around a specific sub-genre that has come to be called "spiritual (J)azz"; however, I often touch base w/ many other facets of the (J)azz tradition.  It is mostly a music mix show w/ occasional live performances & interviews as…See More
8 hours ago
5 Comments 0 Promotions

Jo- Koo of DojO- commented on Jo- Koo of DojO-'s blog post Latest News: Andrew Yang
"Humanity Forward:  Volunteer Appreciation Day!   This week I am full of gratitude for health, family & hope as we head into the holiday season & finish out this very difficult year.   Humanity Forward has…"
Tuesday