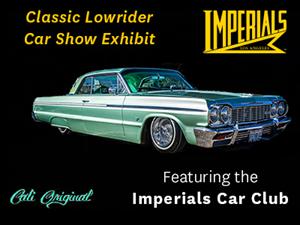 The USC Edward R. Roybal Institute on Aging is sponsoring and hosting a free health fair and classic lowrider car show exhibit with the Imperials Car Club on the USC campus to raise awareness about men’s health issues. The event will also feature live music, food and activities for children.

Over 30 health organizations and community service groups, including USC healthcare professionals, will be on hand to offer free health screenings and information on a variety of issues relevant to men and their families.

Imperials Car Club was founded in 1965 in the heart of East Los Angeles, California. The club represents the American, west coast traditional style of lowriders and is considered by many to be the oldest and most respected lowrider car club in the U.S. They've organized many charity car shows that have benefited schools in the Los Angeles area.

WHY: Held during Men’s Health Month, the event will focus on an issue of importance to all Americans — men’s health. In the United States, men die at a higher rate than women from the top 10 causes of death. Similarly, 1-in-2 men compared to 1-in-3 women will be diagnosed with cancer in their lifetime. Men are also 24 percent less likely to have visited a doctor in the past year. In terms of life expectancy, U.S. men live five years fewer than U.S. women (77 years old compared to 82).