For Sale: The star of Stand and Deliver, Garfield High School

That means a charter school can now manage Garfield.

Garfield has become a political football as charter-school organization Green Dot Public Schools is putting pressure on the district.

This process could apply to more than 250 schools. Other schools likely to be on the list are Jefferson High in South Los Angeles, Lincoln High in Lincoln Heights, Burbank Middle in Highland Park and Maywood Academy High in the city of Maywood.

Math teacher Jaime Escalante – played by Edward James Olmos – built a famed calculus program that resulted in dozens of students earning college credit by taking the A.P. test (including Lou Diamond Phillips). I remember me an nearly every other student at Sahuaro High School in Tucson watching "Stand and Deliver" while in class. What an inspiration. Olmos was just one of the school's famed alumni, including the found of the junior philharmonic and Los Lobos. 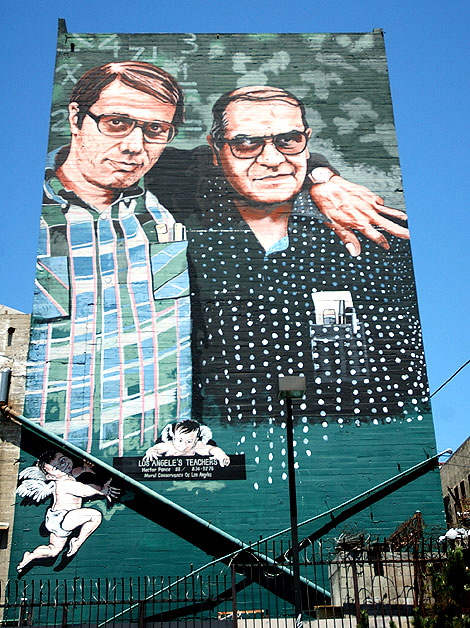 Photo courtsey of justabovesunset.com.
Yet last year, only 5% of Garfield students tested as proficient in any math class.

“It’s hard to have constant progress each year,” said social studies teacher Brian Fritch told the latimes.com “We’re doing our best. People here really care about their jobs and they’re trying to do well.
"The expectation that Garfield would be put up for bidding has affected the campus climate.
“The mood is not good. There is a lot of fear, uncertainty and anger. We have a lot of teachers confused about what the next step will be. People don’t feel included in the process and feel rushed. Even students talk about it.”

Although Garfield dropped three points on this year’s Academic Performance Index, it had improved by 44 and 25 points the previous two years. That gives the school a three-year average gain of 22 points annually, far surpassing the required improvement marks.

Video on Garfield from Intersections.