As the fast-food restaurant ban comes to a close, the debate on whether it worked or if it was a good idea and what to do next has heated up.

One recent study by the Rand Corp. claims the density of fast-food chain restaurants per capita is actually higher in other parts of Los Angeles than in South LA though
the number of outlets per 100 roadway miles is higher for South Los Angeles. 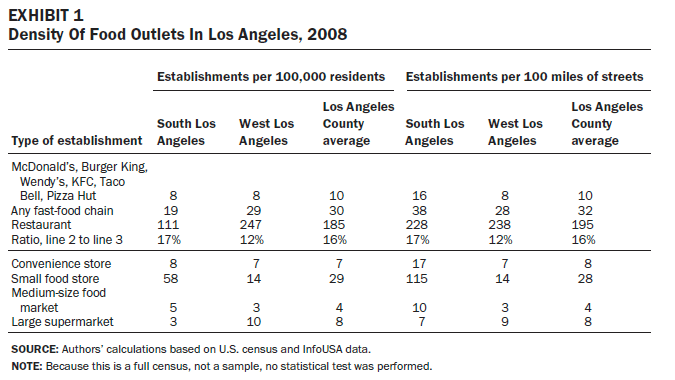 The ban covers a 32-square-mile area for one year, with two possible six-month extensions. The area contains about 500,000 residents, including those who live in West Adams, Baldwin Hills and Leimert Park.

That is contrary to a July 30, 2008, story in The Los Angeles Times that claimed fast-food establishments represented 45% of all restaurants in South Los Angeles, a higher percentage than in any other section of the city. The newspaper said they included small independent restaurants with seating for 10 or fewer people while the Rand study focused primarily on fast-food chains.

Either way Rand doesn't address the idea that proximity to fast food leads to obesity, as a recent study concluded.

So what about calories being posted on the menus so you know that a Big Mac is about 500 calories?

Calorie information on menus may increase awareness of calorie content but has less of an effect on the number of calories people purchase, according to New York University researchers in a study published today by the journal Health Affairs.

But Rand cited calorie labeling as likely to have a bigger impact on overweight and obesity.

Now under discussion are zoning laws to limit small convenience store that sells caloric snacks than other sections of the city.

Join CNN Chief Medical Correspondent Dr. Sanjay Gupta for the latest news about the coronavirus. He'll make sense of the headlines, speak w/ the experts & give you all the information you need to stay safe & healthy.…See More
Wednesday
0 Comments 0 Promotions