Intro to Robo: An interactive robotics carnival for at-risk youth

Living Advantage Inc. invites you to our annual event “Intro to Robo,” a hands-on robotics exhibition on March 22 at the Galen Center at USC. 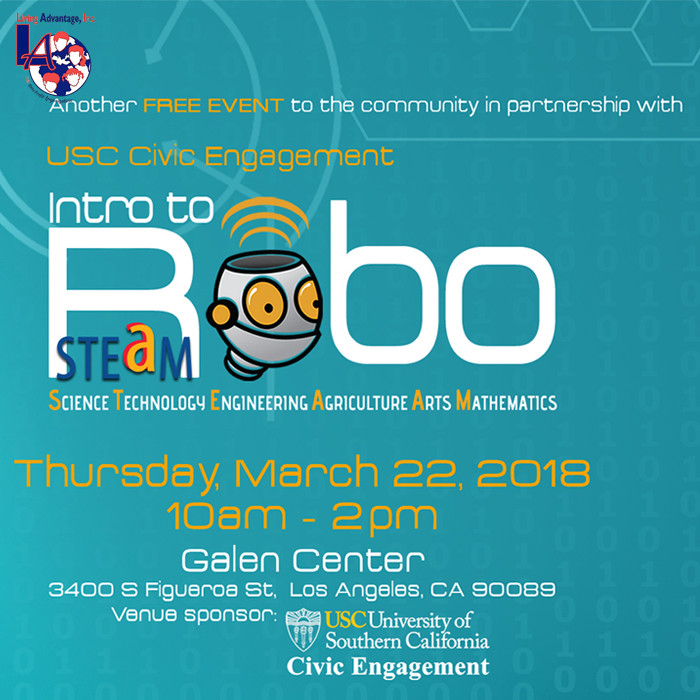 Help the California Science Center in Expo Park get a $500,000 grant from Microsoft

1) Develop a class health/science related project, display and/or exhibit.
2) Participate in the one-day Science Fair competition between classes at the USC HSC quad
3) Participate in a topic-related essay contest in the weeks following the Science Fair

The USC Health and Science Expo is an annual, unique, interactive project…

Scott Glover of the LA Times reports:
"The grand opening was essentially a science street fair, with exhibits
on sound waves, avionics, submersibles, wind tunnels and lots of other
stuff. All were designed to draw kids in with cool demonstrations, then
reveal the science behind the spectacle."

This Saturday October 16th at 10:30 a.m. there will be a science festival and celebration with interactive exhibits and experiments hosted by engineering students from the University of
Southern California for the ribbon-cutting of the new Iridescent Science Studio.

The studio at 553 W 23rd St. in Los Angeles will train university and professional engineers to conduct hands-on science courses for underserved children and their… Continue

Come and see the robots! USC invites University Park to the Viterbi School for an open house

Come and Join Us!

Directions Enter through gate #5 on Vermont …

Expanding Your Horizons: A Girl's Career Conference on Math and Science

Mount St. Mary's College is hosting a girl's science and mathematics conference for girls in
grades 5 - 8 to inform them about careers in the sciences with hands-on workshops. The event is April 10 from 9:30 a.m. to 2:45 p.m.…

Our past, present and future at California Science Center

Jo- Koo of DojO- commented on Jo- Koo of DojO-'s blog post Latest/Breakin' News: Andrew Yang "Debate Winner" - June is Pride & YANG for N.Y. Mayor Month ~
"New Yorkers will head to the polls this Tuesday to cast their ballots for Mayor.    If the early vote totals are any indication of what’s to come on Election Day, our position in this race is neck-'n-neck w/ our…"
Sunday

Jo- Koo of DojO- commented on Jo- Koo of DojO-'s blog post Latest/Breakin' News: Andrew Yang "Debate Winner" - June is Pride & YANG for N.Y. Mayor Month ~
"Our campaign is set to make New York City history! But we need your help.    We’re currently 512 donors away from reaching the most individual donors of any Mayoral campaign in NYC history!   If you…"
Jun 18